The Weighted Average Method of Estimating Expected Future Earnings is Based on the Average or Arithmetic Mean. Here’s Why that’s Important: 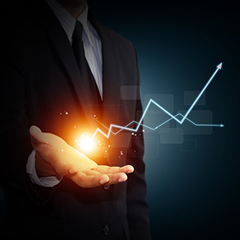 Companies that are growing in revenue need to be valued regularly, and they need to be valued with their future growth in mind The weighted average approach is a valuable tool but Richard Claywell suggests caution in using it to extrapolate large projection of future revenue. Why? Partly because it’s quite often typical for fast growing companies to experience their most dramatic growth during their early years- and it’s important to focus on current market conditions more than past or imagined future conditions.

The weighted average method of estimating the expected future earnings is based on the average or arithmetic mean. The weighted average of historical economic earnings is most appropriately used for calculating future earnings/cash flow when there appears to be a general pattern that may be extrapolated into the future. The pattern may be positive of negative. Generally the analyst applies a heavier weight to the most recent year’s earnings and a lesser weight to the early years. By applying weights or implying that a year has a heavier weighting, it is more indicative of the future.

On the surface, it appears logical to apply the weightings of years one through five, giving the most current year the most weight.

However, when the calculation is made of the weighted, this method will almost always result in a weighted average that is lower than the final year’s revenues or earnings. The issue for the valuator to consider is why a weight is applied and what is the justification for the weight and does it make sense to use a lower value when the earning are on an upward trend?

The following chart represents the way I tend to value future revenues. This projection weighs the final year more heavily than the first years and assumes the most recent year of growth will continue, and, if all this go well, plateau at this level. My method proceeds from a certain carefulness in the general matter of approaching the projection of future revenues.