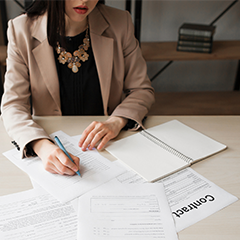 As many businesses in Texas already know, business disputes arise daily. Maybe a publisher infringes on a writer’s copyright, a supplier violates a provision of an exclusivity contract, or a competitor steals a trade secret. Typically, these wrongdoings result in one party losing money. It’s up to the legal system to restore order — and award economic damages.

Here we discuss some approaches to quantifying economic damages, as well as potential pitfalls and contentious issues that may arise.

To start a damages calculation, a theory needs to link the actions of the defendant to a loss incurred by the plaintiff. For example, “But for Mr. X’s copyright infringement, ABC Company would have earned ‘x’ amount more in pretax profits from 2014 through 2016.”

Damages are awarded by courts to make the plaintiff “whole” again. Because plaintiffs typically owe taxes on compensatory damages awards, damages are generally calculated on a pretax basis.

Use a recognized approach

A valuator typically uses one (or more) of several generally accepted methods when persuading the courts to accept a damages calculation. These methods include:

Yardstick method. Damages under this method are based on how guideline companies performed. Industry trends are perceived by the courts to be an objective indicator of how the plaintiff might have performed, if not for the defendant’s wrongdoing. But the subject company must be sufficiently similar to comparable, or guideline, companies if used.

Before-and-after method. Here, damages equal the difference in the plaintiff’s actual performance before and after the defendant’s wrongdoing. Or an appraiser might quantify a plaintiff’s loss by assessing how much the defendant actually benefited from the wrongdoing.

Sales projection method. A valuator may choose to analyze historic trends and forecast how the plaintiff might have fared if not for the defendant’s actions.

Appraisers customize their approach on a case-by-case basis because there’s no universally accepted method for quantifying economic damages. And often they use more than one method to support their opinions.

Damages calculations are a matter of professional opinion. Two competent appraisers employing sound methodology are unlikely to arrive at exactly the same conclusion. Subjective assumptions include:

Discount rate. Discounting projected lost profits (derived using the yardstick, before-and-after, or sales projection method) to their net present value is the most popular way to estimate damages. The discount rate generally reflects the risk of achieving the projected profits and the plaintiff’s use of funds.

Duration of damages. Usually, damages occur over a finite time period. If a plaintiff is permanently damaged, the valuator may quantify damages as the difference in the company’s value before and after the defendant’s wrongdoing.

Costs. Calculations for lost profits include all related costs — not just revenues. For example, if a retailer lost $100,000 in sales due to a breach of contract, the valuator would subtract all variable costs associated with the lost revenues.

A valuator’s skill set includes estimating lost profits. Damages calculations require an understanding of accounting, financial analysis and forecasting, industry and economic trends, and the time value of money. In addition, qualified appraisers know about relevant legal precedent and how to effectively testify in court.

« Buy-Sell Agreements: How to Cover all the Valuation Bases
Surviving a Business Interruption »