I want to tell you something personal about me that very few people know. I was a medic in Vietnam from November 1969 through August 1971. I was assigned to a battalion aid station at Tam Ky and was extremely fortunate as the physicians took several medics under their wings and taught us how to perform lifesaving procedures. This was helpful for when received mass causalities and the soldiers overwhelmed our ability to care for them. That is where the medics stepped in and were able to treat patients and allowed the physicians to care for the more critically injured.

I was a Dustoff medic in Vietnam from December 1970 through August 1971. I flew with the 236th Medical Detachment in DaNang, Viet Nam. Our call sigh was DaNang Dustoff and our field site call sigh was Charger Dustoff. I also did temporary duty (TDY) with the 571st Dustoff in Phu Bai. These were medical evacuations crews that were all voluntary. These dangerous missions were flown under the call sign “Dustoff” and were unarmed Huey helicopters flying and landing in the middle of battles to evacuate wounded soldiers. We also evacuated civilians, Viet Cong and North Vietnamese soldiers. The Geneva Convention stated that we were non-combatants. As a medic I could carry an M-16 to protect my patients and a pistol for my own protection. We were shot at on a regular basis by the Viet Cong (“VC”) and North Vietnamese Army (“NVA”) soldiers

At the age of twenty-one, I was making life or death decisions on which patients to work on.

During my tour, I had five helicopters receive extensive battle damage. I was told that these helicopters could not be repaired and would either be send back to the US to be rebuilt or would be taken offshore and dumped into the South China Sea.

The Dustoff missions were different than all other types of missions using helicopters. When a US unit would engage the enemy, gunship support was normally already involved supporting a different US unit engaged in a firefight. This meant that most of the time, we were landing in the middle of a firefight with no gunship support. Most of the time our only support was what the ground unit could provide.

These incredibly dangerous missions were unarmed Huey helicopters. Of the approximately 3 million US troops that served in Viet Nam, only about 3,000 volunteered and flew Dustoff. The casualty rate for these crews was 3 times that of all helicopter units in Vietnam. Flying as a crewmember of the medical evacuation helicopters meant that you had a one in three chance of being killed or wounded during your tour.

The motto for Dustoff was “so that others may live”. When we arrived on site the pilots would talk to the ground unit and assess the tactical approach needed to land inside the Landing Zone (“LZ”). With or without gunships, we were going to land in the LZ and pick up the patients. This is why we had such a large casualty rate.

These missions were almost always as a single unescorted helicopter that flew into the middle of firefights to extract the wounded. Waiting for gunship support could easily mean death for a patient. In today’s world, the military requires that Dustoff crews be escorted by two gunships. This has resulted in unnecessary death of US soldiers.

Where most helicopter units flew during the day and in favorable weather conditions, these medical evacuation missions were flown 24 hours a day no matter what the conditions (weather or enemy fire) – conditions that often grounded all other aircraft. Lives were at stake and we would do our best to evacuate them, and treat the patients with lifesaving procedures until we arrived at a hospital.

Missions in the mountains meant that these helicopters came to a stationary hover over the treetops and lowered a cable to extract the wounded while perilously exposed to enemy fire. While hovering, we were a static target and again often took enemy fire. Depending on the terrain, the pilots would sometimes be able to lower the helicopter down into the trees. This would involve cutting trees with the mail rotor and tail rotor blades. This is an excellent way to crash a helicopter. Someone here in the US will tell you that this maneuver is impossible. My comment to them would be to talk to a Dustoff crew and ask them how many times they did this. Been there, done that.

Whenever a ground unit radioed that they had wounded casualties, these crews unhesitatingly answered the call.

During daytime missions, a ground unit would pop a colored smoke, which would be identified by the pilots and that would indicate where to land. The night missions were extremely dangerous and the ground units could not pop a colored smoke because the Dustoff crews could not identify the smoke from the air. Some ground units had strobe lights that could be easily identified. So, the question becomes, where do you land, in the middle of complete darkness? Some missions were guided by ZIPPO cigarette lighters.

Landing in a LZ

The approaches varied by pilots. Some would low level from a distance traveling over 100 miles per hour, turn the tail of the helicopter 180o and drop the helicopter into the LZ. I remember several comments where the ground unit thought were going to crash. Another technique was to position the helicopter so it would seemingly just drop from the sky from about 1,000. The G forces were so strong that I could not move when we started the landing approach from the ground. These techniques were honed by the pilots and they were excellent at using their craft.

The military tracked the number of hours flown and the number of patients they picked up. This type of information was not maintained for the crew chief or medic. Based on my flight hours, I estimate that I flew over 800 missions.

As a 20 year old, I went to Viet Nam and received training from some physicians on life saving procedures. I was able to use that training for my entire time while in Viet Nam. Today I still work as a forensic CPA. I work on many cases that involve millions of dollars. I enjoy working on these types of cases. However, the most significant thing I have ever done was to be in Viet Nam and keep soldiers alive long enough to get them to a hospital to get the care of a physician. 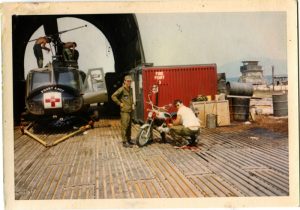 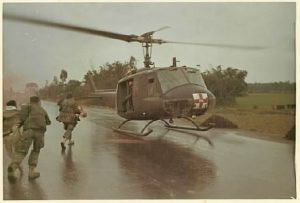