Spotlight on the Market Approach 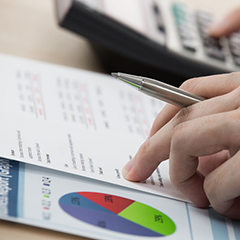 The three general ways to value a business include: the cost, income and market approaches. Here we compare and contrast two methods that fall under the market approach.

For example, a valuator may generate a median price-to-net income multiple of five times based on comparable (or “guideline”) transaction data. If the subject company’s net income is $5 million, its preliminary equity value would be $25 million. From here, various adjustments and discounts may still be required to arrive at a value consistent with the appropriate basis and standard of value.

Valuators evaluate sales of entire businesses under the merger and acquisition (M&A) method. Private companies aren’t required to report the details of their sales, but valuation professionals subscribe to various transaction databases that track this information. Private transaction data has become more widely available and detailed in recent years, as the business valuation discipline has matured and the M&A market has become increasingly active in some industries.

However, one downfall of this method is the perceived reliability of the data. Some M&A transactions may not represent fair market value, especially if the parties were related, a financially distressed seller was compelled to liquidate his or her interest, or a strategic buyer paid a synergistic premium to gain market share. These details may not be ascertainable from transaction data in the databases, which contain only limited information about the deals.

Valuators analyze the details of comparables and understand the nuances of each transaction database used when applying the M&A method. For example, valuators consider whether each comparable is an asset or stock deal and determine what was included in the sale, such as inventory, receivables, fixed assets and debt. Adjustments may be needed to make apples-to-apples comparisons.

Generally, a controlling value is the result of using the M&A method. So, a discount sometimes is needed to value the interest on a minority basis.

Under the guideline public company method, alternatively, valuators derive pricing multiples from prices paid for stocks in publicly traded companies that operate in the same or similar lines of business. Because many public companies are conglomerates that participate in multiple industries and are generally much larger than private companies, this method can be difficult to apply to small businesses that operate as “pure players” in a single industry.

Comparable public stock data can generate a reliable valuation metric when it’s available, especially if the guideline public stocks are traded actively, and the subject company is large enough to trade on the public markets. This method is often preferred by the IRS and courts, as well as when estimating fair value under U.S. Generally Accepted Accounting Principles, because of its perceived objectivity.

Valuators decide what to use

Valuators consider the market approach in every appraisal engagement, but they don’t always rely on either M&A data or public stock prices to arrive at their final conclusions. Sometimes there’s too much variation in the transaction data to provide a meaningful pricing multiple. Other times, there are too few true comparables, or none at all, within a reasonable time frame.

These methods will be addressed by your valuator, and they will explain why they’re included in (or excluded from) the analysis. Doing so will help you and others who rely on the report understand the expert’s mindset, and it also prevents outsiders from assuming that methods were merely overlooked.