Using a Yardstick to Measure Damages 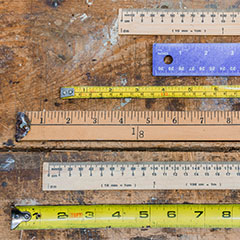 A tried-and-true way to measure economic damages in contract breach, patent infringement and other tort claims is the yardstick method. It’s based on comparisons with similar businesses. Here are some additional details on how this method works — and when it might not work as well.

In damages cases, financial experts are hired to help the court estimate what a plaintiff might have earned “but for” the defendant’s alleged wrongdoing. Rather than base estimates on pure speculation, experts must base them on real-world evidence, in order to withstand scrutiny.

The market data that’s used in the yardstick method is the performance of similar “guideline” companies during the damage period. In other words, an expert compares the plaintiff’s actual performance with the results it could reasonably have anticipated “but for” the defendant’s wrongdoing, based on the performance of other companies in the same industry. In addition to lost revenues, it’s important to consider savings from expense reductions when estimating damages.

The yardstick method may be subject to limitations even though many courts give significant weight to it. For example, it’s generally not used for start-ups that haven’t produced financial results that are comparable to more-established industry participants.

Also, when selecting guideline companies, it’s important to look at more than industry classification codes. Reliable yardsticks may also be comparable in terms of:

Weak comparables can reduce the value of the yardstick method in establishing economic damages, causing the court to give it less weight than other methods of estimating economic damages. However, a weak sample of guideline companies doesn’t necessarily render an expert’s yardstick analysis inadmissible, especially if there’s no direct evidence of lost business.

When using an indirect method to estimate damages, like the yardstick method, it’s important to ensure that your expert’s assumptions are supportable — and to give your expert an opportunity to explain his or her reasoning to the court. Plaintiffs rarely have the luxury of using direct evidence to show how much business was lost from a defendant’s alleged wrongdoing.